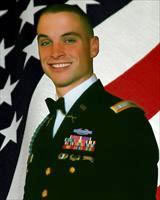 The Mountain Man Memorial March began as a way to honor 1LT Frank B. Walkup, IV, a 2005 University of Tennessee graduate and ROTC alumnus. Walkup,  was killed in action in Iraq in 2007 when an improvised explosive device detonated near his vehicle.

Upon learning of the death of 1LT Walkup, friends and fellow cadets who knew him were looking for a way to honor his sacrifice, and that of  his family and the Mountain Man Memorial March was born.

The inaugural MMMM was held in Gatlinburg, TN in April of 2008 with 40 Cadets from East Tennessee ROTC programs. It consisted of a 26.2 mile march with each Cadet carrying a 35 pound ruck sack. The UT Ranger team carried a picture of 1LT Walkup and presented it, along with a Gold Star flag, to his mother at the completion of the event.

Along with dozens of 45 ROTC units, participants now include active duty military, reserve and guard units, veterans of all services, family & friends of the fallen, JROTC units, Boy Scouts and school groups who walk, march or run a variety of distances, all while carrying the name and photo of a fallen service member.  Some carry a picture of a loved one or family member during the event, while some march in honor of someone they never met, but they all “Honor Through Action”

More than a decade later, this event this has become one of the largest Gold Star Family events on the east coast to celebrate the service and honor the ultimate sacrifice of these fallen service members.

In 2012, members of the American Legion Post 2 in Knoxville, TN took over the operation and organization of the MMMM event.  This is an entirely volunteer led event.

We look forward to the upcoming 2023 race.  Many of you wished to have the race back in person and we are excited to make this happen!  We are also likely to continue offering a virtual race option in future races.